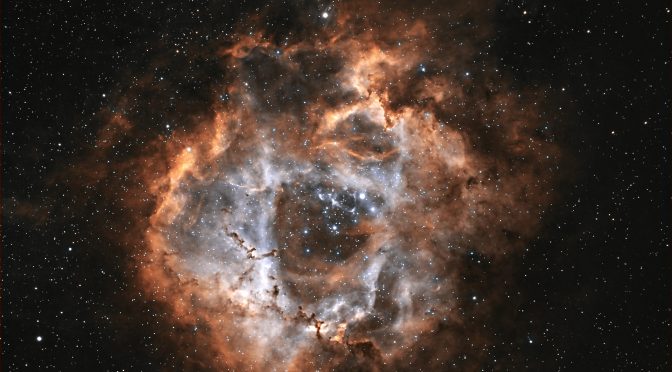 The image below was corrected using PixInsight’s Deconvolution to fix/correct the raw data that was later added as Luminance frame for the SHO combination.  Also the combined imaged was later exported to Photoshop CC2018 with a little bit of Smart Sharpen filter.  Overall the image looked clearer and have more detail than the previous two.

So far the image below is my favorite that I actually ordered a 24×30 canvas print.  The result was very easy to the eyes and really loved the combination of blue and gold.

This image depicts a very fire’y core of the nebula, while the bluish clouds are perfect for blending in the background.  Didn’t do much on this as it is very well seen in the star halos (magenta) and the background gradient fix actually made the image worst, but this image was invited to the Flickr’s Explore Gallery where it got a lot of Fave’s

2 thoughts on “Processing the Rosette Nebula”