When it was simple

It’s been a while since I started working with my own focuser. It started simple with a goal of having a hand controller that will control a motor attached to the focuser that will prevent the scope from vibrating while doing focusing as a lot of time gets lost doing this iterative task and is crucial in attaining a very sharp image.

I started with a servo controlled by an Arduino board. Made a small circuit with 2 buttons and 1 variable resistor. The 2 buttons controlling the rotation of the servo and the variable resistor to control the speed of the rotation. I had no problem doing the Arduino programming as am I software developer but I did encounter a lot of problem in making the brackets that will attach the servo to the focuser knob. Then it started to be complicated as I need to add a timing belt, with wheel and etc.

The first iteration of the focuser was attached to my C11 and it has proven it’s value specially when doing planetary imaging as I’m using the maximum magnification needed to get a good photo of a planet.

The need to control the focuser using the computer suddenly increased specially in my setup.  When I was just doing planetary imaging with manual filter wheel doesn’t hurt much as it is very quick compared to deep sky imaging.  With deep sky imaging where exposures are very long and waiting for each session to turn the filter wheel and adjust focus doesn’t make any sense anymore.  I recently bought an electronic filter wheel with an ASCOM driver and having the ability to write a script to do my all night imaging session.  But it’s a pain in the end that my focus keeps on changing and affecting the overall quality of the images when I’m changing filters and when temperature suddenly drops.

With the latest and greatest development of my focuser project, I decided to use a stepper motor, a UN2003 motor controller and my arduino with a totally different method in mind, complete automation, meaning that everything should work with a script or a program that will do all my imaging.  I started working on my own ASCOM driver which is available in GitHub as an open source project so that everybody can contribute and should also help a lot of people trying to create their own ASCOM driver.  Help and example for developing an ASCOM driver is very difficult this is one of the reason why I’m sharing the code. https://github.com/EverettQuebral/EQFocuser 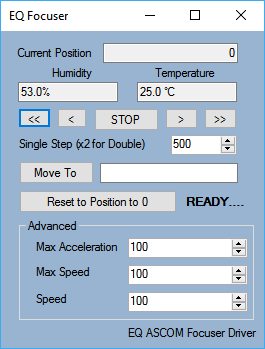 One thought on “Long Road to my own FOCUSER”